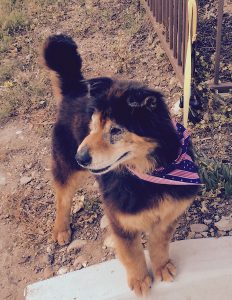 Each morning, barks across the yard
The sprinklers, giant wet snakes hiss in the bushes
Attacking each in turn with brave battle cry and wet snaps
His black brown fur beading in the fine mist
Every morning the battle rejoins, until the hiss retreats
Then a wet panting nap, drying in the warm sun

Found sedated in the pound, a puppy of just nine years
Unable to stand but too proud not to try, we watched
He pulled one paw under him, then the others, one by one
Slowly he rose from the floor to his full height, head high
And just as slowly he faded back down, until his chin rested
We applauded his character and returned to adopt

A bachelor on a busy corner, he held court like a furry king
Neighborhood walks, adventures from the back of the truck
Moving to suburbia adapted as the elder statesman in the back
Slowly time took its inenvitable toll, a handsome dark face turns grey
Daily long walks become shorter and less frequent
Can’t see well and doesn’t care what most people say

He still rose to greet until he could no longer
Early morning silence loud across the yard
The wet snakes will hiss alone this morning, just sprinklers
No defender appears in soft soggy black brown armor
His fine brave vigil over, his big dark eyes closed, at peace.
Early morning tears rise to greet the absence of this sweet old soul.