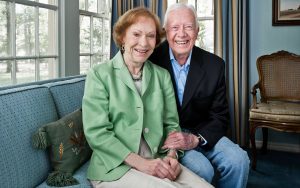 Jimmy Carter and his wife Rosalyn have severed their entire lives as stewards of their faith, their community, their state, their country and humanity. As the 39th President of the United States, Jimmy helped the American people recover from the tremendous drain of the Viet Nam War and the subsequent Nixon/Ford administration. Jimmy grew up in Plains Georgia and after high school and attending a year at college in Ga, he was accepted to the United States Naval Academy. Graduating 60th in a class of almost 600, with a BS and was commissioned an ensign. When he graduated, Carter married his sister’s best friend, Rosalynn Smith in 1946. Carter served seven years in the submarine navy. He was promoted to Lt Jg and in 1952 became associated with then Captain Hyman G. Rickover who was tasked with establishing a nuclear navy. He was scheduled to join the plank owner crew of the Navy’s first Nuclear Submarine, the USS Seawolf when his father passed away and he had to return to the farm.

Earl Carter, Jimmy’s father has been a moderately successful farmer and had been elected to the Georgia State House of Representatives shortly before his death. However settling his fathers debts and the will’s distribution of Earl’s assets did not leave much to Jimmy. To make matters worse, his first year as a famers after returning from the Navy there was a terrible drought and almost the entire crop was lost. For awhile after they came home from the Navy, Jimmy, Rosalynn and their 3 boys lived in public housing. Jimmy had to negotiate 3 lines of credit to keep the farm afloat. while he took courses to learn more about agribusiness and Roslyn took bookkeeping classes. Working together they did grow the business and became quite successful before he entered politics.

Georgia in the early 1950s, was experiencing a great deal of racial tension. Unlike many of his fellow farmers, Jimmy was in favor of racial integration. As he became more active in his church and community, he voiced his racially tolerant beliefs, especially when he was elected to the chairmanship of the Sumtner County School Board. A change in representative factors for the State Senate, opened up a seat. Carter entered the race with just 15 days to campaign was not expected to prevail and didn’t but fraud was suspected. Carter challenged the results and fraud was found. Carter won the new election.
Carter served for two terms as state senator during the turbulent times when racial unrest was ever present. He and his family were very supportive of President Kennedy and the changed that he represented for the country. Oh the last day of his term, Carter announced he was running for Congress. A series of moves and counter moves effectively caused Carter to withdraw from the Congressional race and run for governor in1966. A Kennedy supporter in the deep south, he ended up loosing to Lester Maddox and finding himself deeply in debt.

Jimmy returned to Plains to focus on his faming related businesses. He also became more religious and was “born again”. He did missionary work to other cities and states. He also decided to run for Governor of Georgia again. Carter sought the black vote but appeared very hypocritical as he praised conservatives against segregation. Carter’s 1970 campaign for Governor of Georgia was successful and he was sworn in January of 1971. He declared in his inaugural speech that “the time of racial segregation is over. . . . No poor, rural, weak, or black person should ever have to bear the additional burden of being deprived of the opportunity for an education, a job or simple justice.”

His time as Governor. was marked by an aggressive state government reorganization that consolidated over 300 agencies into 22 and the fine line he walked on integration. He was aggressive approach to appointing blacks to state employee, judgeships and boards. He placed a portrait of fellow Georgian Martin Luther King in the Capital. But he also actively opposed bussing. He favored equalizing funding and improving schools in the poor and rural parts of Georgia. He caught the eye of the national environmental movement when he vetoed a dam project because he thought the Army Corps of Engineers had underestimated the cost and the impact to the surrounding areas.

Carter was ramping up for the 1976 Presidential Campaign. He started to insert himself in national level issues and joined southern planning commissions. However by the time the 1976 political cycle started, there was little chance Carter would prevail in the primaries. Polls had him at 4% in January of 1976 but the gap quickly closed. By mid March, Carter not only led the democratic party entries but also President Ford by a few points. He had to beat Wallace in the south and win all of the conservative Christian and rural votes in the North. He did both handily. He went from virtual unknown to the Presidency in about 9 months.
Carter’s Presidency started tough and got tougher. Domestically, he inherited an economic recession exacerbated by inflation and an energy crisis. Carter recognized that America was vulnerable to energy reductions and proposed pursuing alternative renewable energy, reducing consumption – more efficient cars, trucks and busses. He installed Solar Panels on the White House. He offered amnesty to Viet Nam draft evaders. Internationally, he was fairly successful in negotiating the Camp David Accords between Israel and the Palestinians. He negotiated the SALT II treaty with the Soviets and gave back the Panama Canal to Panama. Carter orchestrated a number of conservative economic policies that ultimately eliminated the recession and inflation problems bur most of the benefits would not be visible until he left office. Carter was a champion of deregulation. He deregulated the Airlines Industry opening up the business to new competitors. He also deregulated Beer. Many of the restrictions put in place during prohibition were removed by Carter, thus enabling home brewing and the entire Micro Brewing industry in America.   The greatest single historical event that occurred during Carter’s administration was the Iran Hostage Crisis. In November of 1979, Iranian students took over the US Embassy in Tehran and took 52 American Hostages. After months of failed negotiations, Carter ordered Operation Eagle Claw to rescue the Americans. the mission failed killing 8 service men and loosing 2 aircraft in the desert of Iran. The hostages were finally released after 444 days and Carter had left office.

The Soviet Invasion of Afghanistan in December of 1979, prompted Carter to try to repair a strained relationship with Pakistan in order to use Pakistan’s Inter-Services Intelligence (ISI) as the conduit to get weapons and money to the Afghani resistance or mujahideen. Initial support from the US was purposely modest. somewhat less than $500,000. If you ever saw Charlie Wilson’s War or read the book, you know what by the time that program ended the CIA had funneled almost $3billion into Afghanistan by the time it ended under Regan.

Carter’s loss to Regan was epic. The combination of alienating the Liberals who wanted Ted Kennedy to run and the conservative backlash from the Iran Hostage situation. Carter never stood a chance. When he returned to his peanut business that had been placed in a blind trust, Carter found the his trustees had mismanaged the business putting him almost $1million in debt.
In 1982, Carter founded the Carter Center in Atlanta, GA to advance human rights and alleviate human suffering. Carter Center is a non-profit, non-governmental agency that provides support for conflict resolution and election monitoring as well as support disease control and eradication throughout the world. Carter Center has been credited fro eliminating 99% of the world’s Guinea Worm disease but has also been instrumental in controlling other diseases, improve crop production and clean water.

Carter and the Carter Center have mediated and served as monitors and support in a number of difficult situations throughout the world including Haiti, Bosnia, Ethiopia North Korea, Sudan and other countries. Carter has also been very active in expanding Habitat For Humanity, building affordable housing. In 2002, Carter received the Nobel Peace Prize. the first American President to be awarded the price after leaving office.

Jimmy Carter has been active in his vocal support and criticism of the government and his party. I believe he was the most honest, principled and thoughtful President America has ever had. I don’t always agree with his positions, options and statements but I always consider them. Though they never cared for each other very much, Bill Clinton and Jimmy Carter shared much in common in terms of their genuine allegiance to the principles of democracy, the role of government and art of the possible. I think that is why they remain effective leaders long after they left office.