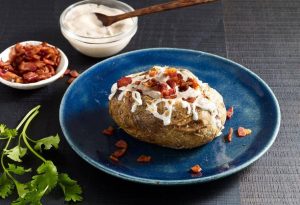 Stolen from Pati Jinich’s Mexican Kitchen on Create TV. This recipe was developed as a bye-bye dinner for her son leaving for college so its just for two but I think you can do the math:) I tweaked it a bit to make even more spectacular as potatoes go, You can do this pretty much in advance and just leave the last step to just before serving the meal. This is a great side for a nice hearty skirt steak dinner and a great salad.

2 large russet potatoes washed and scrubbed
2 teaspoons olive oil
5 thick slices of bacon coarsely chopped
3/4 cup Mexican crema
3 tablespoons sauce from chipotles in adobo sauce
0-2* chipotle chiles in adobo sauce minced ( peppers are *optional but I would include 1-2 tsp of the adobo sauce as a minimum.  Otherwise you almost have to mumble when you say “Mexican” Potatoes.. You don’t want to mumble do you? Go crazy mince them chipotles!! :))
1/2 teaspoon kosher or coarse sea salt plus some to season the potatoes
1/2 cup Oaxaca cheese grated ( I test drove a nice sharp Cheddar and Monterey Jack mix too and was great too)