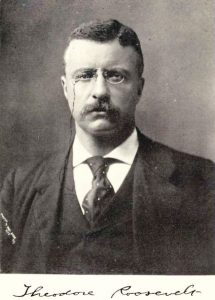 As a boy, two of my heroes growing up were complete contradictions of each other. They were both extraordinary men who overcame tremendous obstacles and accomplished greatness. They were both flawed individuals of extraordinary character and courage. Abraham Lincoln was almost the opposite of Teddy Roosevelt. The contrasts of these mens lives made their lives and deeds even clearer to me. Lincoln was born penniless without privilege any sort, Roosevelt was born with the preverbal silver spoon in his mouth. While Lincoln was hale and hearty as a boy(save for almost downing and being kicked in the head by a horse), Roosevelt suffered from Asthma and other ailments that made him a sickly child. They were also very much alike in that they never let any obstacle truly hinder their goals. They both tended to face difficulty head on and found ways to make their intentions take the day. Perhaps this trait was the one I had admired most as a boy who enjoyed great health and activity with a brief interruption for serious illness.

Theodore “Teddy” Roosevelt, the our 25th President of the United States was a New Yorker, born and bread. He was born in Manhattan in 1858 and died in Oyster Bay New York in 1919. He served as our youngest President starting at age 42, when William McKinley was assassinated in March of 1901. Roosevelt was a progressive and had an anti-corruption, “Square Deal” for the common citizen approach to government. He had a global view of America’s changing role in world affairs, creating the “Great White Fleet” to project American military power. He created today’s National Park System as he was a great naturalist, hunter and fisherman. He is probably most famous for his “Rough Rider” personal in Cuba and the creation of the “Teddy Bear” that was the result of Roosevelt refusing to kill a bear cub on a hunting trip. But people forget he also averted a war in Venezuela; Created the Panama Canal and won the Nobel Peace Prize by negotiating the end of Japanese-Russo War with the Treaty of Portsmouth. He also successfully mediated a dispute between France and Germany over the status of Morocco.

Roosevelt was a very public person. He served in public office almost his entire life – Public Service Commission, NYC Police Commissioner, Assistant Secretary of the Navy, Governor of New York, then Vice President and finally President of the United States. He was active in speaking often and openly to the press on a multitude of subjects. He also provided lots of news worthy fodder with his bigger than life personality, plain speaking and boldness which suited him well save for a few occasions. He was criticized in the South for inviting Booker T. Washington to the White House for dinner. He was the subject of many political cartoons.   There were other controversies surrounding the President relating to political influence by Standard Oil contributions exceeding $150,000 to Republican election coffers. Standard Oil wanted rights to franchise oil pipelines over Indian lands, the Secretary of Interior supposedly denied the request and after a group of Republican Senators lobbied with him, Roosevelt over turned the decision. Roosevelt declared the accusation, “a lie, pure and simple” and obtained a denial by his accusers stating that he neither coerced or overruled the Secretary of the Interior in the matter.

After leaving office, Roosevelt lead in exploring Africa’s wildlife as a Smithsonian Expedition, killing or trapping over 11,400 animals to be displayed at the National Museum and the American Museum of Natural History. He also traveled Europe extensively, meeting with many heads of state.

I never agreed with all of Roosevelt’s policies or politics. He was a complex man with complex views governed by a high standard of personal commitment to ethical behavior. That is a very tough combination in the rough and tumble world of turn of the century politics in the US. Roosevelt became disenchanted with his successor, President Taft. It was thought that Roosevelt felt slighted by the lack of consultation on choosing cabinet members, key policy making as Taft strove to “be his own man”. Roosevelt completely broke with the Republicans and formed the “Progressive Party” which was based upon what he called, a “New Nationalism” which focused more on labor than capital and controlling the growth and influence of corporations including a ban on Corporate donations to political parties. Roosevelt felt that companies like Standard Oil and others were buying preferential consideration in government.

The split in the Republican party saw the Democrats take the majority in the House for the first time since 1800. In 1913, Woodrow Wilson was elected President beating the incumbent Republican(6.5 million votes), Taft (3.5million votes) and the Progressive (Bull Moose) candidate, Theodore Roosevelt (4.1million votes).

Roosevelt headed to South America on another scientific expedition to map an uncharted headwaters to a river that fed the Amazon. He was wounded in the leg in an attempt to keep some canoes from being damaged by rock and contract river fever and malaria that almost cost him his life. It was reported that he requested his son and the expedition leave him to die but they prevailed at a slower pace to complete the mission. He had lost 50lbs and would suffer from swelling of his leg and malaria relapses the rest of his life.

Returning home, he withdrew from the Progressive nomination and encouraged his fellow progressives to return to the Republican party as an antidote to Wilson who he disagreed with a great deal. With the outbreak of WWI Roosevelt attempted to raise another Rough Rider force to attach in France and obtained congressional permission to raise 4 divisions but Wilson put an end to that by stating he would not order Roosevelt’s force to France, electing instead to order Pershing and his expeditionary forces to France. Roosevelt never forgave Wilson. He campaigned vinously and the Republicans regained the congress. During the campaign, Roosevelt created a lot turmoil over Irish and German American’s being unpatriotic because they saw them selves as “hyphenated Americans” instead of 100% Americans.

On January 15, 1919 Roosevelt was ill and was treated for difficulty breathing by his doctor. By 4:15 the next morning Teddy died in his sleep when a blood clot found its way to his lung, Once told, his son reported to his siblings, “The old lion is dead”. Wilson’s Vice President, Thomas Marshal was said to have commented, “Death had to take him when he was asleep for had he been awake there would have surely been a fight”.

This was a flawed, imperfect, passionate American leader who gave so much to his country. By the sheer force of his own will he became a historical Scholar, Author, Taxidermist, Explorer, Soldier, Statesman, Mediator, Hunter, Fisherman, Father and Husband. He attacked all of these roles with energy that astounded witnesses and impressed adversaries. He was curious about everything and principled in the way he lived his life. To accomplish all that in just sixty years, well that makes Teddy one very interesting human.