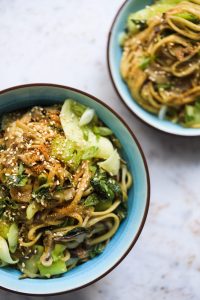 This is another refugee from my MilkStreet source. I have loved this dish for a long long time but never made it for myself. I tweaked it some and everyone who tried it at my  house seemed to like it. It’s a little complicated and I had trouble finding dried shitakes so I used fresh and seemed to work out in a tasty way.