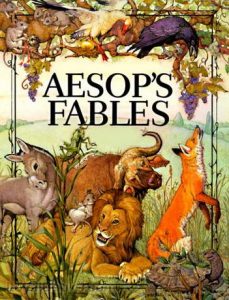 Talk about interesting human beings!!! How cool is to have wonderful and instructional stories and fables attributed to you while there is absolutely no evidence that you actually existed??!!! Aesop is reportedly the fabulist (cool word huh!! Look it up!) and storyteller who gave us all of these animals and things that were smart, solved problems and most importantly made us think. His fables and stories have been told over and over again for thousands of years!!!

Yet he is mostly rumor. Aristotle placed his date of birth around 620 BCE in Thrace on the Black Sea Coast but several other Greek and Roman scholars and poets provide alternative theories as to his place of birth. One of my favorite historical biographers, Plutarch tells us that Aesop once a slave but freed, was killed in Delphi while on a diplomatic mission for King Croesous of Lydia. it is said that he insulted the Delphians, was convicted of a trumped-up charge of temple theft and was thrown from a cliff. The Dephians reported suffered pestilence and famine for their troubles.  Before he perished, Aesop was said to have met with Perinateor of Corinth and the Seven Sages of Greece. It was said that Aesop was a popular contender for inclusion into the Seven Sages.Adding to the mystery surrounding Aesop are the variations in the timelines promoted by all the scholars and poets who tell of his life and times.

One thing is not in dispute is the importance of his prolific work. He wrote over 600 Fables that have been translated into about every language you can imagine (even Creole! and Japanese).

You would be wise to put reading all of his fables on your Bucket List.