Do you remember the first time that you felt grown up? Was there some event that caused you to think the words, “Wow! I am not a little kid anymore.”?  It happened back when you were still definitely a little kid. Some signal came to you, albeit premature and inaccurate, that you had finally grown up. This happens to both boys and girls. You may have several of these moments in your life. There are, of course, the standards … When coach tells you to buy your first jock strap or mom comes home from the store with your new “training bra”. But there are also personal ones that are special only to you.

On the first day of 6th grade English at Coral Gables Elementary, Mrs. Brown informed us that we would all need fountain pens. Her homework assignments had to be neatly written in ink, and double spaced. Up till then, everything had been done in pencil. So that night, mom took me to Woolworths or maybe Jefferson’s to buy my first fountain pen.

I was practical in my selection. Pens that had dark cartridge reservoirs might make it hard to see the ink level. The Scripts cartridge fountain pen I chose had a medium silver tip, a cover with pocket clip and a clear barrel. I had seen the other grown up kids and even men, with their silver clips holding their fountain pens in their shirt pockets. Even though my pen came with two full cartridges, I got mom to buy me an additional package of five more.

As soon as he saw it, my little brother wanted to play with the pen but given his propensity to become covered any and all colorful liquids and foods, my mom made him promise to never touch my fountain pen. “Fountain pens are for big boys”, she said. But he watched with fascination, as I removed the packaging. I found a little cubby hole in our desk for my extra cartridges. I put one in my bookbag for emergencies at school or the library.

Pat chanted in his little kid’s sing-song voice, “You’re gonna break it…” over and over, when I started to take my new pen apart to put in the cartridge. I took off the barrel and put the cartridge inside. I slowly recrewed the barrel back into the pen and felt the cartridge being pierced. Everything went perfectly!

I took out a piece of paper and tried to write.  Nothing happened. I tried words, symbols and then just long lines. The pen made this strange scratching sound that was very different than any pencil I had ever used. Over my shoulder, Pat giggled his chant.  I was about to call my mom when the ink made its way through that weird bug belly looking bottom part of the nib. Now every move I made with the pen left a wet blue trail on the paper. It was like magic.  Of course, Pat had to smear the blue writing in all over the paper, covering his pudgy little hands and then his t-shirt. Technically, he had not touched the pen but mom was still mad.

The next morning, I clipped my new fountain pen in my shirt pocket and went to school – like a grown up! Before homeroom, we would all gather in the playing field to talk about what happened on “Combat” the night before or trade “Sgt. Rock” or “Superman” comic books or toss this little football around before class. I showed my new pen to all my friends and even a few girls. We compared features and brands, while the little kids listened with interest. Scripto pens, seemed to edge out Sheaffer pens, I think because they were cheaper. Scripto pens were ninety-eight cents each and Sheaffers were a buck and a quarter. Most of us bought pens with medium sized nibs but some selected fine tips. One girl in my English class chose Peacock Blue ink! We were all so grown up!

All day long we were comparing our pens. By 5th period English, I had a big blue spot at the bottom of my shirt pocket. I wrapped my brand new, all grown up, leaky pen in a paper towel. 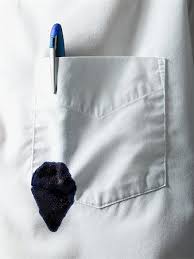