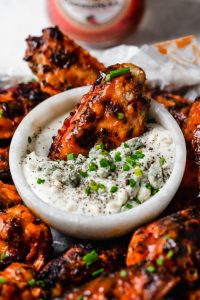 I have been a big fan of Buffalo chicken wings since they flew out of Buffalo. But I have only cooked them at home about 3 times and my wife actually did the deed (she is the frying queen). I just hate having to deal with the mess, and the the oil when you are done. Blech! So when I found this little doodad on line, I went for it. Works great!

Serve hot with Bleu Cheese or Ranch dipping sauces and celery sticks if you like.