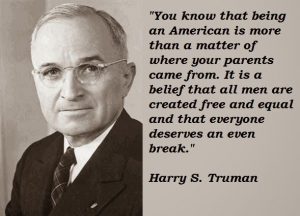 As a boy, I knew about Harry Truman. He was the president who ordered the atomic bombs to be dropped on Hiroshima and Nagasaki to end WW II. He was also the president who fired the much celebrated General Douglas McArthur. I must have learned in school that he was our 33rd president and followed FDR who was our longest serving president. As grown man, I enjoyed reading Harry’s biography by his daughter, Margret Truman and learned a great deal more about this very interesting man. As a father and someone who aspired to lead others, I found Harry’s use of humor, self-deprecation and decisiveness to be helpful throughout my life and career.

A life long democrat and from a family of democrats. Because of WW I and his service where he rose from a Corporal running the canteen to Captain in charge of a battery of artillery, Harry was a late comer to the world of politics. After the war, he returned to Missouri, where finally marred Bess Wallace. He had proposed to Bess before the war but she turned him down. He was 38 years old when he was first elected as a preceding judge in Kansas City with the help of some connections he made while serving in the army. The interpersonal communications and leadership skills Harry developed in the Army served him well throughout his long political career as did some of the key relationships he made. Raised Baptist and Presbyterian, Truman never had much use for the charismatic or revival baptists and even server as Sabot Goy doing chores for jewish friends who were prohibited from working during Sabot. He was a mommas boy always..and even sought his mothers counsel on political matters when he was president. As a boy growing up in Independence Missouri, he enjoyed music, reading and history. He took piano lessons twice each week until he turned 15.

Upon graduating from high school, briefly attended a business college to learn bookkeeping but left to take on various clerking and bookkeeping jobs. He started several business ventures but never really made any money. He attempted to attend the tuition free West Point but was rejected due to poor eye sight. He enlisted in the Missouri National Guard when the US entered WW1. He actively recruited men to expand the company and was elected by his battery as First Lieutenant. His united was deployed to France in mid-1918 along with about a million other Americans. Truman was promoted to Captain and became the commanding officer of Battery D. Truman was very unpopular as he addressed the battery’s discipline problems but eventually won the respect of the men. Active right up until the very end of the war on November 11, 1918, Battery D lost no men under Truman’s leadership. He was discharged as a Major in May of 1919 from the regular army but was appointed Lt Col. in the Army Reserve Officer Corps and ultimately rose to full Colonel and Regimental Commander of the 1st Battalion, 379th Field Artillery Regiment. He remained active in the reserves until FDR command all reserve Officers in Congress be moved to inactive status so they could focus on war time legislation during WWII. Truman volunteered for Active Duty when the war started but was turned down for age and eyesight considerations.
Shortly after marrying Bess Truman after returning home from the war, Harry won his first election for Jackson County Court Judge in 1922 but was not selected in 1924. He sold memberships in the automobile club until he could be elected to Presiding Judge in 1926. During the depression and throughout the New Deal era, Harry lead several local political initiatives and gained a reputation for getting things done. Harry Truman was elected to the Senate in 1934 with the grudging support of the Pendergast Machine of Kansas CIty. During his first term, Pendergast was sent to prison for tax evasion. Truman’s association with Pendergast was a liability during his first term and almost cost him the re-election but he was able to prevail by a margin of 8,000 votes in the Democratic Primary and defeat the Republican challenger by 2% in the election. In his second term, Truman became a national figure for his investigations into Military waste, shoddy contractor work and price gouging as the nation prepared for war.

As FDR prepared for an unprecedented 4th term as President, his party was concerned that his current VP was too left leaning and unpopular with the majority of democratic leaders. There was concern that FDR might not live out his full term as well. FDR was willing to accept either Truman or Supreme Court Justice William O. Douglas. In 1945, the FDR-Truman ticket won by a large majority or electoral votes. Truman had been VP for 82 days when FDR died on April 12, 1945. During that time the two men had met twice and he knew almost nothing about many of the governments most important and ambitious efforts, including the Manhattan Project that was poised to deliver an operational atomic bomb.

The war in Europe was ending. Truman attended the Potsdam conference and hinted about the atomic bombs to Stalin who knew before Truman of their existence through espionage. The Potsdam conference outlined the invasion of Japan if they did not surrender. While he was at the conference Truman learned that the atomic bomb tests were successful. The Potsdam Conference ended, Japan rejected the terms and by August 9th Truman had ordered the deaths of 105,000 Japanese in Hiroshima and Nagasaki. The Japanese surrendered the next day. Truman maintains that his decision was based upon the governments estimates of the casualties expected durning an allied invasion of between 250-500,000 men.

Harry’s job did not get easier after the war ended. Long pent up resentments between labor and management in many industries and between congress and the executive branch were released once the war was over. Inflation was high. War debt was staggering and Truman was committed to reducing the size and cost of the military as quickly as possible. Unions unleashed strikes to address wages and benefits that stagnated during the war in steel, coal and railroads. Harry became very angry with Union leadership and drafted a lot of very creative legislation to address what he thought was unpatriotic behavior. He went from being one of the most popular presidents (82% approval) to one of least popular in a very short time. The Republicans too control of the congress for the first time since 1930. Truman tried to work with the new Republican leadership but it was tough. Republicans passed over his veto the Taft-Hartley Act curtailing the labor unions.

In 1948, President Truman advocated a national health care insurance policy to ensure all American’s had access to good health care. He also proposed an aggressive civil rights program as moral priority for the nation. He supported the creation of the United Nations and appointed Eleanor Roosevelt as a delegate. He created the Truman Plan which included curtaining the post war communist imperialism activities and the Marshall Plan which was the architecture for rebuilding Europe. Harry recognized the State of Israel in May of 1948. He consolidated several military departments into the Department of Defense and created the Department of the Air Force. When the Soviets blocked access to the Western Sectors of Berlin, Truman ordered an series of airlifts to supply the city until the Soviets relented granting ground access on May 11,1949. Truman was also a staunch supporter of NATO.

No one had much hope for Truman in the 1948 Presidential elections. Going into the Democratic Convention with just a 36% approval rating, He almost didn’t get the party’s nomination. Two weeks after accepting his party’s nomination which included a fairly strong civil rights plank in the party platform. Returning from the convention, Truman, by executive order, integrated the U.S. Armed Services and Federal Agencies. Truman then set out on a whistle stop campaign that covered 48 states and over 21, 000 miles. He talked to the American people. Often abandoning his prepared notes and explaining what he was going to do. In the end the Republican’s Dewy ended up with only 139 electoral votes.

Truman’s second term was marked by invasion of South Korea by North Korea and the return of General Douglas MacArthur to the worlds stage. Truman provided the UN charger, and MacArthur led a successful campaign that pushed the North back to the Yalu River. The Chinese invaded and pushed the UN troops back the 38th parallel to a stalemate. MacArthur wanted to attack Chinese supply lines but Truman was afraid of escalation. MacArthur shared his proposal with the Republican’s in congress who leaked it to the press. Truman fired General Douglas MacArthur from all his commands which proved to be one of the most unpopular actions taken by a president. There were calls for Truman’s impeachment.

His years as president were marked by a tremendous work ethic. Truman was the last president to be elected who did not have a college degree. He was well read, as smart and creative as any global problem solver. His energetic hi-octane approach to the presidency, his fondness for poker, cigars and bourbon and his open minded approach towards, unions, integration and women rights all combined to cause discomfort in many if not most of the most polarizing factions.

During his presidency, the condition of the White House was horrendous. The floor fell in both the Truman bedroom and bathroom. The surveys indicated that the building had to be completely rebuilt. They supported the historic exterior and completely replaced the foundations and the entire interior of the building.

He left office at the lowest approval ratings of any president up to his time. Since then the American people, experts and historians have come to recognize that Harry S. Truman was one of our greatest presidents. He died of massive organ failure in 1972 at age 88 and is buried with his beloved Bess (who passed in 1982) at the Truman Library and Museum in Independence Missouri.