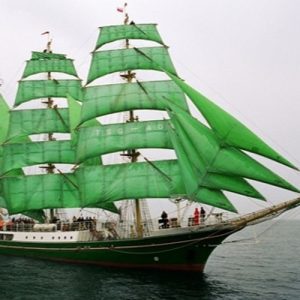 In the year of our Lord, eighteen hundred and six
We set sail from the fair Cobh of Cork.
We were bound far away with a cargo of bricks
For the fine city hall of New York.

She’s an elegant craft, she was rigged fore-and-aft
And oh, how the wild winds drove her.
She had twenty-three masts and she stood several blasts
And we called her the Irish Rover.

There was Barney McGee from the banks of the Lee,
There was Hogan from County Tyrone.
There was Johnny McGurk who was scared stiff of work
And a chap from West Meade called Malone.

There was Slugger O’Toole who was drunk as a rule
And fighting Bill Casey from Dover.
And your man Mick McCann from the Banks of the Bann
was skipper of the Irish Rover.

We had five million hogs, we had six million dogs,
And seven million barrels of porter.
We had eight million sides of old blind horses hides
In the hold of the Irish Rover.

We had sailed seven years when the measles broke out
And the ship lost her way in a fog.
And the whole of the crew was reduced unto two,
‘Twas myself and the captain’s old dog.

Then the ship struck a rock Good Lord what a shock
we nearly tumbled over,
Turned nine times around, and the poor dog was drowned
I’m the last of the Irish Rover.