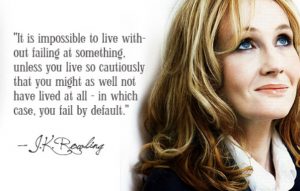 Most know this woman is the author of the Harry Potter stories but as a real human she appears to be as formidable and powerful as the noblest of her fictional characters. The Harry Potter story came to her on a delayed train ride from Manchester to London. She moved to Portugal to teach English as a foreign language during the day and wrote the first 3 chapters of what would become the Harry Potter saga at night. She met and married her husband and had a little girl before the marriage broke up.

Feeling a total failure she moved with her infant daughter from Portugal to Scotland to be near her sister. She took the chapters with her. The jobless, single mother suffering from clinical depression applied for welfare. As with her mother’s death and other challenges, she found a way to work through her loss through her writing. Her depression became the Dementors featured in her books. Her estranged husband came to Scotland to claim his wife and child but she was able to get a restraining order and filed for divorce.

She finished her first book mostly in cafes as her daughter would sleep if taken for walks in her stroller. Her book was rejected outright by over a dozen publishers before the eight year old daughter of one of publishers read the first chapter and demanded to read the next. And the rest, as they say is history.

Harry Potter is now a ubiquitous member of almost every family as the books and movies have enjoyed a huge demographic appeal. In 2004, the once welfare funded single mother was named the first US Dollar Billionaire from writing books. Rowling has parlayed her significant wealth in the philanthropy benefitting children, single parent families, multiple sclerosis (the disease that took her mother) and Special Olympics. She remarried and has added a son to her family.

From her humble beginnings as a struggling single parent author on welfare in Scotland, Joanne made the Forbes List of Billionaires but has been donating so much of what she earns to charity, she has only managed to stay on the list briefly.

Her life must surely feel magical as her idea to escape the boredom of a stuck train lead her to become the graceful and intelligent icon for compassion, generosity, and creativity that she is today..