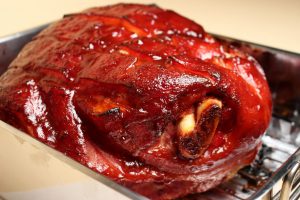 This is another refugee from Create TV. This is a magic way to take a supermarket smoked ham and turn it into something special. This approach only goes so far with Spiral Cut hams. If spiral cut is important to you, adjustments will have to be made to this process. You may elect to forego the whole “ham detoxification” part where you are simmering the bejesus out of the ham the day before you serve. Either way you can get to this great glazed ham. This will serve about 8.

This will provided wonderful main course fare for the entire family as well as tasty left over sandwiches and perhaps a hearty bean soup later.