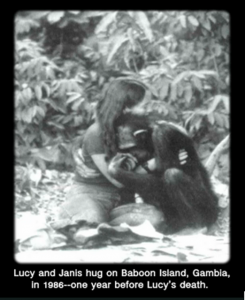 Janis Carter was a grad student in psychology at the University of Oklahoma when she got a 3 week job in 1977 to help 2 orphaned and captive born chimpanzees return to the wild. One of them was Lucy, who was raised as a human child, learned sign language and was rather famous for her achievements. The three week transition plan quickly fell apart because the chimps didn’t know how to be chimps and weren’t that interested in foraging for their own food, socializing with other chimps and living apart from humans. Living as humans with humans was all that they knew.

She started with just the two chimps but once in Gambia they found that there were more chimps that needed help to acclimate to the wild. Janis would lead them on foraging treks. Showing them which leaves and berries were safe to eat. She taught them about the dangers of crocodiles. They still clung to her. wanted her food and to live with her.

So Janis, conned some English solders into building her a large cage and had them airlift it with a helicopter to the island where she released the chimps. The cage was for her not the chimps. She knew if they chimps were ever going to become acclimated they needed to be kept apart from her. So she stopped feeding them and comforting them and created some distance. The chimps were angry and hurt by these changes. Lucy would sign for Janis to come out to her to play or cuddle and Janis would sign, “ No. Lucy Go” and Lucy would sign the sign for “hurt” and stayed. The chimps would get angry and sleep on the top of Janis’ cage to be as near to her as they could. At night, when they would get frightened by the sounds of hyenas they would urinate and defecate on top of Janis in the cage below. Janis finally got some corrugated metal shingles to cover the cage which kept out the rain and bodily fluids but the chimps found great fun in dancing on it at all hours of the day or night. However, eventually. after about a year of Janis living in the cage most of them found their way to feeding themselves and living together without Janis.

Except Lucy. Janis ended up giving Lucy some of her food simply because Lucy had lost so much weight and would not feed herself. Janis had almost given up hope for Lucy when one day when they were walking together Lucy brought Janis some leaves to eat and Janis shared the leaves with Lucy, After that Lucy began to find food and feed herself. But she still would not socialize or remain apart from Janis for any significant amount of time. So Janis decided to leave the island to give Lucy more time apart to find her way back to living with just the other chimps.
Janis stayed away for a year. She would circle the island in a boat to check on the chimps but never landed. After a year, she did land and the chimps came out to her. Janis brought Lucy some of those things she loved … her mirror and her crayons. Lucy played a with them a little. They shared a really long hug and Lucy made Janis feel like it was ok. When the other chimps decided to leave, Lucy went with them and didn’t look back.
The evidence is that Lucy was killed by a poacher she approached about a year later. Janis is still in Gambia. She works with her chimps on now 3 islands and the local population of villagers to protect wild chimps and their habitat. Janis’ patience, humanity and toughness has given these completely unique animals an opportunity to enjoy a full life even after other humans interfered when they were little.