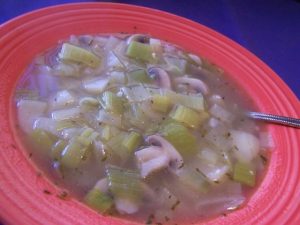 This week I just got a hankering for some nice light soup. Many of the Leek soups that I have enjoyed have included heavy cream and a much greater potato content. I enjoyed them but I wanted something less heavy. I have included heavy cream in the ingredients should you feel so inclined. I think this soup is great without it but it will also be good with it. So worked up this one after watching someone cooking another dish involving leeks on TV. I hope you like it as much as we did.