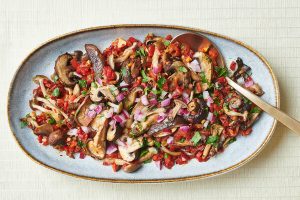 I found this one on the NYT Cooking site. It is healthy and tasty, I think. Any recipe that starts out with get 2 lbs of mixed mushrooms is going to get my attention. This dish originates in West Africa but my version (tamed peppers) take some of the burn out. Use the Scotch Bonnet or Habanero to return it to its roots.