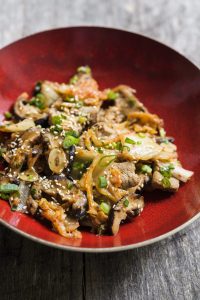 The other white meat deserves some Kimchi loving! I saw this and thought it would be great. I am told that you can use cubed extra firm tofu instead of the pork and it is as good, but I haven’t tried that. The only thing that was “hinky” about this reciepe was the whole Kimchi juice. All the Kimchi that I buy is wet but its not olives where there is huge amount of liquid. Soooo … I substituted Key Lime Juice. Tasted great!

Serve with rice and have Sriracha available