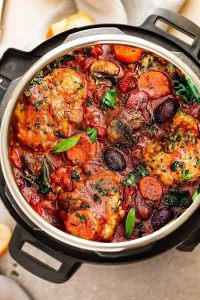 I got this one from the NY Times Cooking Section. I learned that ‘cacciator’ means ‘hunters style’ and it is said that it was originally a recipe for rabbit. In any case, if you do this bad boy and sever it over polenta or pasta or even as a hoagie sandwich, you will not regret it.