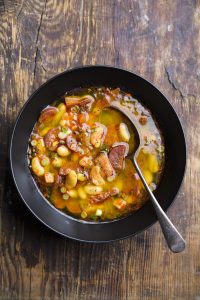 Another tasty refugee from Milk Street. I loved my time in Spain and I remember that I had this stew for lunch one day in Madrid. I wanted to try it for myself. Some times its difficult to find Saffron so I added a substitute. I also think this would be a great left over ham bone stew too.