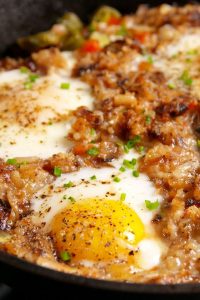 I had heard about this quite awhile ago but never had it. I was doing some YouTube searches for another dish and stumbled across this one. Naturally I put a couple of my my touches to it. I would have thought to be truly White Trash Hash it would have to have some Velveeta in it but ultimately could not forsake real cheese for authenticity.

Careful about adding salt and pepper between the hash and gravy it can end up salty.

1/3 lb. breakfast or hot Italian sausage, casings removed,
2 tbsp. all-purpose flour
1 c. whole milk (start with a cup but you may have to add more to get the right consistency depending upon the fat content of the sausage)
Salt and pepper to taste