“ Dobroho ranku”, or “Good Morning!” in Ukrainian, an Eastern Slavic language spoken mainly in Ukraine.  I have decided that the UJT will remain focused on Ukraine until we can all rejoice in the end of hostilities.  It has been 336 days since Russia invaded Ukraine.

This week I learned some stuff:

• We have lost so much recently. Jeff Beck’s and David Crosby’s music helped me remain true to myself and carried me through dark and happy times (which can be almost as dangerous as dark times). The good news is that they left their hearts and souls for us in their music. To me that is true immortality, leaving a legacy of beauty for others to enjoy long after we have passed – music, painting, art, planted trees and children.

• The Prostate Adventure continues.  I got my 2nd MRI in the Soft Tissue Study done as well as my first radiation treatments this week. The drive is as long and painful as the procedure is not. I was in the treatment room for 17 minutes!

•  I sympathize with my fellow Californians north of us but celebrate the cause of their disaster. We have enjoyed the first sustained rainfall in months. I hope the reservoirs are refilled and that the mountains are buried in snow. Mother Nature keeps reminding us that for all our intentions this is still a desert.

• January  26th is the 26th day of 2023! Just 341 days till Christmas! Today in 1837, the great state of  Michigan is admitted as the 26th U.S. state; Governor of Massachusetts, John Albion Andrew receives permission from the Secretary of War to raise a militia organization for men of African descent today in 1863; On this day in 1905, the world’s largest diamond ever, the Cullinan, which weighs 3,106.75 carats (0.621350 kg), is found at the Premier Mine near Pretoria in South Africa; Also that same day but in 1915, the Rocky Mountain National Park is established by an act of the U.S. Congress; The 41-acre (17 ha) Chain Island is listed for sale by the California State Lands Commission, with a minimum bid of $5,226 today in 1959; Today in 1998, on American television, U.S. President Bill Clinton denies having had “sexual relations” with former White House intern Monica Lewinsky; Nadya Suleman (AKA Octomom) gives birth to the world’s first surviving octuplets. today in 2009.  Today in 2020, a Sikorsky S-76B flying from John Wayne Airport to Camarillo Airport crashes in Calabasas, 30 miles west of Los Angeles, killing all nine people on board, including former five-time NBA champion Kobe Bryant and his daughter Gianna Bryan; Iran hostage crisis: Douglas MacArthur, American general, Medal of Honor recipient was born today in 1880; Bessie Coleman, first woman lot of African and Native American heritage to be issued a pilots license was born today in 1892; Seán MacBride, Irish lawyer and politician, Irish Minister for External Affairs Nobel Prize laureate was born today in 1904; Also born today but in 1911,  Polykarp Kusch, German-American physicist and academic, Nobel Prize laureate; Maria von Trapp, Austrian-American singe was born today in 1905: Bob Uecker, American baseball player, sportscaster and actor was born today in 1934; Today in 1951,David Briggs, Australian guitarist (Little River Band), songwriter, and producer was born;  Ellen DeGeneres, American comedian, actress, and talk show host born today in 1958: Born today in 1961,  Wayne Gretzky, Canadian ice hockey player and coach; Nicolaus Otto, German engineer, invented the Internal combustion engine passed away today in 1891; Bear Bryant, American football player and coach died today in 1983; Today,  Barbara Hale (AKA Della Street from Perry Mason) American actress  passed away in 2017;  And lastly, we lost Kobe Bryant, American basketball player and his young daugher today in 2020.

• Week 2 for our Vocabulary Quiz

• This week did a lot of cooking but didn’t add any new recipes.

•The Home Page quote for this week seems to be a good  reflection of me. This one in comes from the late great Janis Joplin,  “I am one of those regular weird people.”.

•  I did some pond maintenance and yard prep for reseeding this week. So not much done in the Art dept.

• I am continuing my streak of slacking off on the paper edits of Grandpa Stories. I just haven’t carved out any time for more chapters.

I remember as a little boy, my Grandma let me pick out my new sneakers for school. I picked out red PF Flyers. They were so cool and worth every penny of the $4 they cost. But when I went to school, all the kids teased me about my new sneakers.  Ever since, I have suffered ‘new shoes’ anxiety until my shoes reach unremarkable used.  Strange huh? And another thing! What possesses people to carryon speaker calls in the stores or doctors office or DMV. I think it is just so rude!I don’t want hear what Jim-Bob’s wife thinks about his new fishing rod or her reminder to pick up a six-pack of PBR on the way home at full cell phone volume in Walmart. I just don’t get it.

This week I am  celebrating my good fortune with some remarkable music that I hope you will enjoy.

•   David Crosby  — Hero — This loss it me hard. I always felt a kindred spirt in The Coz. Even from the distance I could see he was a complicate mix of a human being. That golden voice and amazing songwriting made him a spectacular star in my galaxy growing up in the late 1960s and 70s. This my last favorite solo thing from him. It comes from his 1993 release, “Thousand Roads”. As always the music is superb but take the time to find and read the lyrics. I think might be the best description of how I felt about David Crosby, RIP…

• Todd Rundgren — Bang on the Drum All Day  —  This is a great song that has made me smile every time I have heard since 1983, since his“The Ever Popular Tortured Artist Effect” album was released.  This one reminds me of my friend Heide! I didn’t meet her 1999 but I remember she even went to Senegal on vacation to “bang on her drum all day”.

•   The Jimi Hendrix Experience – All Along the Watchtower  – It is said that Bob Dylan liked Jim’s cover of his song so much, he started to incorporate its phrasing in his live shows on his tour with The Band in their 1974 tour. From all reports, it was a great cover of a cover. I never got see Dylan and The Band play but I did see Jimi play this live in July of 1970 at the Miami Jai Alai Fronton (a great acoustic venue) just before I joined the Navy in August  He was found dead in a London hotel room a little less than a month later while I was in boot camp. This song comes from his “Electric Ladyland” album released in 1968.

• The Doors — Soul Kitchen — This was a very special cut from their self-titled debut album released in 1967. Jim Morrison wrote the lyrics about a soul food restaurant called, Olivia’s” in Venice Beach, CA. He was always staying so late that they had to kick him out. During Vietnam, we were all seeing so many horrendous images with our dinners watching the evening news, that the pivotal like in Soul Kitchen took on a special meaning. “Learn to Forget..”.  It was a popular song with the deployed troops and was even featured in the Vietnam War scenes in Forest Gump when he saves Lt. Dan.

• Greta Van Fleet — Your the One — This selection maybe too eclectic for some but there is something about this band that resonates in me. This one comes from their 2018 album called, “Anthem of the Peaceful Army ”. These boys are from Michigan and really seem like reincarnated Led Zeppelin. Not so much in this song but many others I sampled.

•   The Byrds — Turn! Turn! Turn! — Another of my all time favorite songs! The Byrds biggest hit released in 1965 as the title cut of their second album. The song was written by Pete Seeger in his 1950s adaptation from the 3rd chapter of the Book of Ecclesiastes of the English version of the Bible. Jim McGuin (AKA Roger McGuin) and David Crosby harmonize so perfectly.  A beautiful, inspiring song.

That’s it… Do the best you can; Laugh every chance you get; Always remember… The best is yet to come! As always, thank you for being my friend! 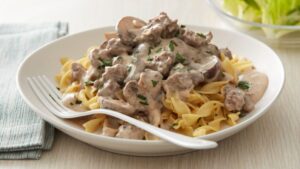 Since I was a teen, I made this dish mostly with meatballs, It was cheap. relatively quick and very filling. I still like it today but time and money are not as a big a factor as they once were so in this version I have used braised chuck roast in stead of my trusty meatballs. We liked it a lot. 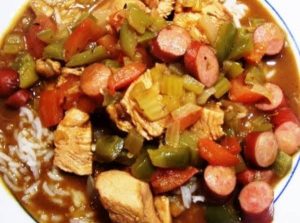 Getting ready for Fat Tuesday, I started looking for recipes and found this one. You can use comparable amounts of Crawfish or Shrimp. We have a member of our family that is allergic to shellfish so we add it after we have ladled out her portion. This makes a lot of Gumbo, Cher!.