“Magandang umaga (inf), or “Good Morning!” in Tagalog, an Austronesian language spoken mainly in the Philippines. It is Day 231 of the California Lock Down. I have opted out of my weekly poker game. I will do the set up on the super poll workplace. But if the protections seem inadequate I will bow out of that as well. I am sure by now almost everyone has been touched by this disease. Another friend of mine lost his mom to Covid recently. Please be careful out there.

This week it has been reported that carelessly discarded disposable PPE is showing up in the water ways and oceans. If you use disposable masks make sure that you break both elastic rings before discarding them. That way if they somehow escape the trash processing and end up in the waters we won’t won’t have fish, turtles or birds constrained.

This week I learned some stuff:
• There is a new film exposing the terrible regime of Rodrigo Duarte. It is called “ FRONTLINE: A Thousand Cuts” Anytime I feel particularly disgusted by the shenanigans of our current Presidential mistake, I just consider Duarte and feel a little less bad because I can be worse. Check your PBS listings but it airs locally on November 17th at 10pm. There is another PBS film that I hope to catch as well. It’s NOVA’s “Saving Notre Dame”. This documentary on how engineers and scientists are trying to protect and rebuild the 800 year old building airs the following week, November 25th at 9pm locally.
• Working at the polls has been interesting. I ask everyone who checks in with me if they normally vote in person or if this year was special for some reason. It seems that the people who usually vote at the poll, still prefer to do that. Only a few said they chose to do it because of stories in the press about mail in ballot issues. Working the Polls and Census gig both have been great people watching experiences. All in all I would say Americans are pretty nice folks… at least to fat old white guys doing polls or census work.
• Like most everything else about 2020, the holidays will suck. Halloween was a bust despite the best efforts of moms and dads everywhere. Thanksgiving with be marked by the inadvisability of large family get togethers. And for Christmas we can look forward to lower stocks of presents, perhaps tougher logistics of delivery and annual visits to far away family will be reduced if not curtailed. The good news is we can still touch base with everyone electronically. We can make sure those stranded apart are not alone. Make list of everyone you care about and plan to call them between Thanksgiving and New Years just to let them hear your voice and that you care. It maybe the best and perhaps only present you will give yourself this year.
• November 5th is the 310th day of the year (because 2020 is a leap year – but there still only 50 days till Christmas!). Today in 1889, George B. Selden is granted the first U.S. patent for an automobile; On this day in 1916, The Everett massacre takes place in Everett, Washington as political differences lead to a shoot-out between the Industrial Workers of the World organizers and local police; Today in 1912, Woodrow Wilson is elected the 28th President of the United States, defeating incumbent William Howard Taft;In 1925, British secret agent Sidney Reilly, the first “super-spy” of the 20th century, is executed by the OGPU, the secret police of the Soviet Union; On this day in 1940, Franklin D. Roosevelt is the first and only President of the United States to be elected to a third term; Today in 1950, British and Australian forces from the 27th British Commonwealth Brigade successfully halted the advancing Chinese 117th Division during the Battle of Pakchon, Korea; In 1956, Suez Crisis: British and French paratroopers land in Egypt after a week-long bombing campaign; Today in 1968, Richard Nixon is elected as 37th President of the United States; Bill Clinton is reelected President of the United States in 1996; In 2009, U.S. Army Major Nidal Malik Hasan murders 13 and wounds 32 at Fort Hood, Texas in the deadliest mass shooting at a U.S. military installation;Roy Rogers, American singer, guitarist, and actor was born today in 1911; Vivien Leigh, Indian-British actress best known as Scarlet Ohara in “Gone with the Wind” was born today in 1913; Gil Hill, American actor (Inspector Todd in Beverly Hills Cop series of movies), police officer and politician is born today in 1931; Harris Yulin , American actor (White Staffer James Cutter in “ Clear and Present Danger”)was born today in 1937; Art Garfunkel, American singer-songwriter and guitarist was born today in 1941; Sam Shepard, American playwright and actor was born today in 1943; Gram Parsons, American singer-songwriter and guitarist was born today in 1946; Al Capp, American cartoonist (Lil Abner) died today in 1979; And finally, one of he Righteous Brothers – Bobby Hatfield, American singer-songwriter passed away today in 2003.

Website Update:
This week we made the following changes:
• Week two for our New Vocabulary Quiz.
• Last week for the UJT Musical Trivia Quiz.
• This week I realized that I hadn’t put my wonderful (even iffn I do say so myself) Bleu Cheese Dressing recipe on the UJT. I know I meant to do it because I wrote it down after probably 40 years of just doing it. I also added an updated Beef and Bean Stir Fry to the UJT recipe box. I am trying to replace “peanut oil” with “flavor neutral” oil as so many seem to be allergic to peanuts these days.

Writing, Ceramics, Stained Glass and Painting Update:
• I have added stained glass to this section because lately it’s the only creative thing I do besides cooking. Started back on my project using lead came instead of foil. I am learning the I have to be more precise in my glass cutting using this method or at least it seems so, I am recutting a couple of pieces.
• This week I managed avoid attending all of my classes. Again.
• Grandpa Stories is still not re-published.

Weird-Stuff-O-Meter:
• I know some of you folks disagree with my conviction that Donald Trump is perhaps the very worst thing to happen to our country since the founding father decided to put off the slavery issue till after the country was formed, in order to get the constitution done. I find the procedural manipulations by that chinless weasel Mitch McConnell and his ilk disgusting and the resulting Supreme Court appointment equally so. This is another case where basically good people justify their amoral actions by pointing to the result – by any means possible. I also feel that some have had to work very, very hard to overlook the gapping flaws between what has been said and what is truth and what they believe is right. As I complete this week’s UJT Update we still don’t know if Trump is gone yet. But one thing is for sure, given the closeness of the race, the crumbling of America is continuing. If Trump wins, the pace will be much, much faster.

Once again, your fossilized DJ takes you on another meander through the dusty cobwebs of my library. This week features a number of, perhaps more eclectic, favorites that I hope you will enjoy.

This week’s UJT Radio Program:
• Joe Walsh – Rivers (of the Hidden Funk) — I forget what I was doing but somehow I ended up on this rock and roll review article from back in the day that critiqued the album and this song in particular. It features a guitar duel between the tragically underrated Don Felder and Joe. This was written for an Eagles album but got left off so Joe released it on his solo album “There Goes the Neighborhood” released in 1981. This is a great record featuring some of the old Barnstorm gang mix up with a couple of wayward Eagles.
• Eagles – Hole in the World – This was the band’s reaction to 911. It’s also the first Eagles song to be released without Don Felder since 1974. This is a beautiful sad song. Seemed kind of fitting the sing about a hole in the world by a band with a hole in it too.
• Ed Sheeran — The A Team — This is a very sweet cut that was just released as his first single in 2011. He wrote it at the last minute for a homeless benefit ..about a young homeless prostate addicted to Crack cocaine .. A class A drug.
• The McClymonts — A Woman is a Flame — This might be too “country” for some but I like it. These sisters have beautiful voices that only get better in the harmonies that they sing. This is from their “Wrapped Up Good” album released in 2011.
• Venice — The Water — The boys from up north got a little hot and rocking on this one. But they didn’t forget to bring their harmonies along. This one is from their “Home Grown” released in 2008. There is some fine guitar work on this cut.
• Traffic – The Low Spark or High Heeled Boys – This week we celebrate the 49th anniversary of the release of this iconic album. The haunting melody and Steve Winwood’s high voice interweaving as if by magic. I know in 1971 when I first heard this song I thought it was magic! This is also one of my friend Mike Fallin’s favorite songs.

That’s it… Do the best you can;  Laugh every chance you get;  And always remember …  The best is yet to come!  As always, thank you for being my friend! 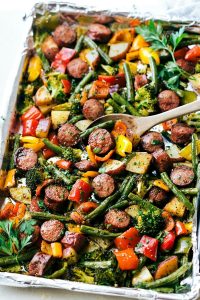 To be honest, most of the time I can tie back my new recipes to someone else’s that got me started thinking along the lines of, “That sounds good but wouldn’t it be even better if we …” This time is different because I am just not sure where the idea came from but it was good.